This is a brief story about a beloved theater starting with the consummate showman and entrepreneur who built it, William S. Wilder, and its journey across generations to the present-day where it is still a major local attraction for movie-lovers of all ages. 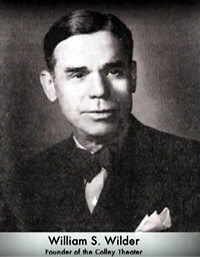 der was born in Portsmouth in 1890 at the same time that the technology and art of cinema were just being birthed. He grew up in the golden era of early cinema and as a young man worked in many of the local movie theaters including The Norva, The Strand, The Colonial and The Wells Theater in downtown Norfolk. He worked hard to learn all the operations needed to run a movie house.

By the late 1920s, there were numerous large movie palaces operating successfully in downtown Norfolk, on Granby Street. Wilder saw an opportunity to develop suburban theaters that were a bit smaller in size. He first opened the Newport Theater on 35th St in Norfolk in1928 and then in 1936 he built The Colley Theater in Ghent (which was renamed “The Naro” in the 1960s). Later he acquired The Gates in Portsmouth, The Warwick in Newport News, and The Grandin Theater in Roanoke. His crown jewel opened in 1945 on High St in Portsmouth – The Commodore Theater, now owned and operated by Fred Schoenfeld. These were all single-screen theaters featuring balconies and beautiful architectural aesthetics.

Wilder also worked in live theater and appeared on stage when he was young. And although he never lived in New York or Hollywood, he produced and promoted vaudeville and musical shows that he brought to Norfolk’s Center Theater (Harrison Opera House). 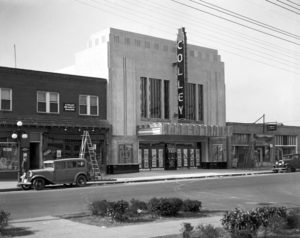 The Naro opened as The Colley Theater on February 24, 1936, built for what was at the time the substantial sum of $75,000. It was a modern suburban theater with the latest amenities and appointments in the Art Deco style. At 500 seats, the theater was smaller than the older massive downtown movie palaces. The opening night picture was an adaptation of Shakespeare’s A Midsummer Night’s Dream starring James Cagney, Olivia de Havilland, and Dick Powell.

Wilder’s illustrious career was cut short when in 1946 he died of a heart attack at the age of 56. But his movie business continued in the hands of his very capable wife Myde Wilder who continued to run their movie operations for many years with business partners Robert Morgan and Sidney Bowden. Their company continued to expand with the development of The Wilder Drive-In on Little Creek Rd in the 1950s and later The Princess Theater in Virginia Beach and The Garden Theater in Norfolk. 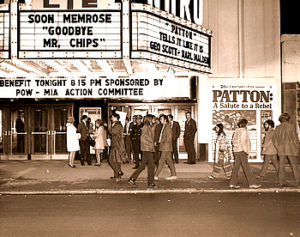 In the 1960s the theater changed hands and new owner Robert Levine changed the name of the theater from Colley to Naro, combining the names of his father and mother, Nathan and Rose. Levine owned or operated a number of the suburban single screen houses in Norfolk including The Riverview, The Rosna on 35th St, The Roselle in Ocean View, and the large and beautiful Memrose that was torn down in the 1970s for the expansion of Norfolk Sentara Hospital. The Naro is the only theater in Levine’s chain that is still open and operating as a movie theater.

The 1960s and 1970s saw the rise of consumer-friendly multiplex cinemas away from downtown neighborhoods, which along with changing demographics and technology helped to put Levine out of business. By the early 1970s he had lost all of his theaters to creditors. The ownership of the Naro defaulted to the Stein family and their estate remains the landlord of the theater building.

The theater had a brief life as a playhouse called The Actor’s Theater with live stage productions in the mid-1970s.

In fall of 1977, the Naro’s lease was taken over by two young upstarts, Tench Phillips and Thom Vourlas, who lived right down the street from the theater and wanted to showcase some of the foreign, art, and independent films that had been missing from the area. Their company, Art Repertory Films (ARF, Inc) has programmed and operated the Naro as a decidedly independent theater to compete with the big theater chains that mostly featured Hollywood blockbusters and pop-culture features. In the early years of the ’70s and ’80s, the theater held a virtual monopoly on the showing of classic movies. There were few if any videos to rent, no cable TV or home satellite dishes, no internet (!) — and only three major networks for most television content. It was a golden era for specialty cinema and the Naro thrived.

Watch a local TV news segment on the revival of the Naro by two home-town boys.
(click sound on, lower right of screen)

In 2011 the theater celebrated its 75th year of operation (see video below) but now, along with all of the new competing media vying for audiences, it was facing a potentially mortal threat from the cinema industry’s switch to digital projection. Film studios announced that within a short time movies would no longer be printed and distributed on 35mm film reels, which would effectively render the Naro’s expensive reel-to-reel projectors obsolete and unusable with the new digital media. A major investment was needed, but it would be a difficult one for the theater’s owners to undertake by themselves. Fortunately, in 2013, a local crowd-sourcing funding appeal raised over $80,000 from about 400 donors, in just a few months. (See donor roll video below) The loyal community of Naro fans had stepped up to help the theater acquire a state-of-the-art digital projection system to ensure that this local treasure could keep serving up big-screen films, new and old, in dazzling high-definition. And with a nod to its heritage, the giant red velvet screen curtains still open and close with each presentation, and the now antique reel-to-reel projectors are still in the booth, just in case an occasion comes along to show a print-film.

In the 21st Century, the Naro has ridden a wave of unprecedented technological changes. The worldwide web has radically changed the social habits of modern life. The web has eaten up books, newspapers, music, and now movies. Video rental stores have mostly gone the way of the dinosaurs as streaming video-on-demand has reshaped viewing habits.  Will the Naro survive as a community gathering place for public audiences to experience new films, live music, speakers, and public discourse? In this age of YouTube, Facebook and Netflix, will people even want to continue to view films with a public audience? As in the past, the box office will decide the Naro’s fate. Currently, there are some encouraging trends, such as full-house younger audiences coming to our Friday Night Flick-It cult movie events, and solid attendance for many of our documentary nights and Sunday Film Forums.

With a little help from Clarence, the guardian angel from It’s a Wonderful Life, there just may be some more life left in this beloved old theater.

Here’s an updated version of the retrospective video created for the Naro’s 75th anniversary in 2011:

The credit roll below features the names of more than 400 donors to the Naro’s 2013 Clarence Digital Cinema Campaign which provided funding for the theater’s transition to a digital projection system.

The Naro’s concession stand is famous for its delicious snacks and low prices. 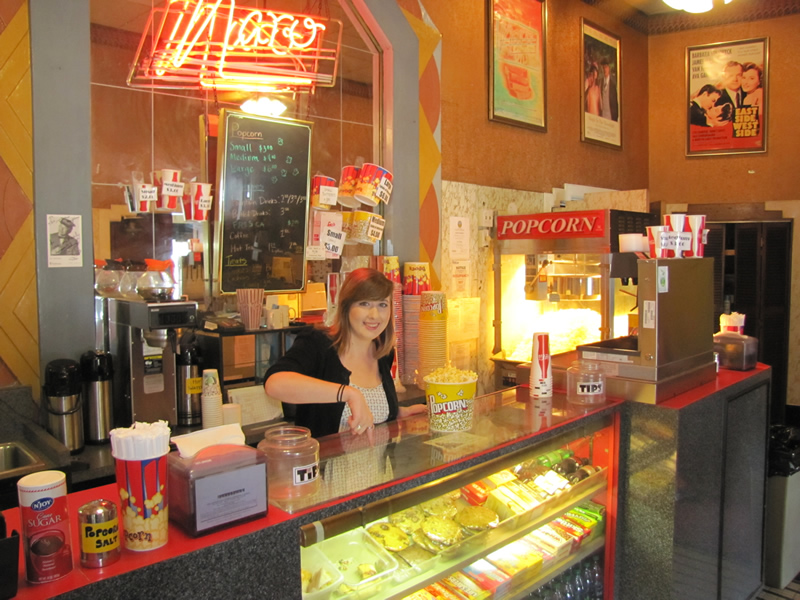