Looking Back at 2019 and Hopes for Next Year 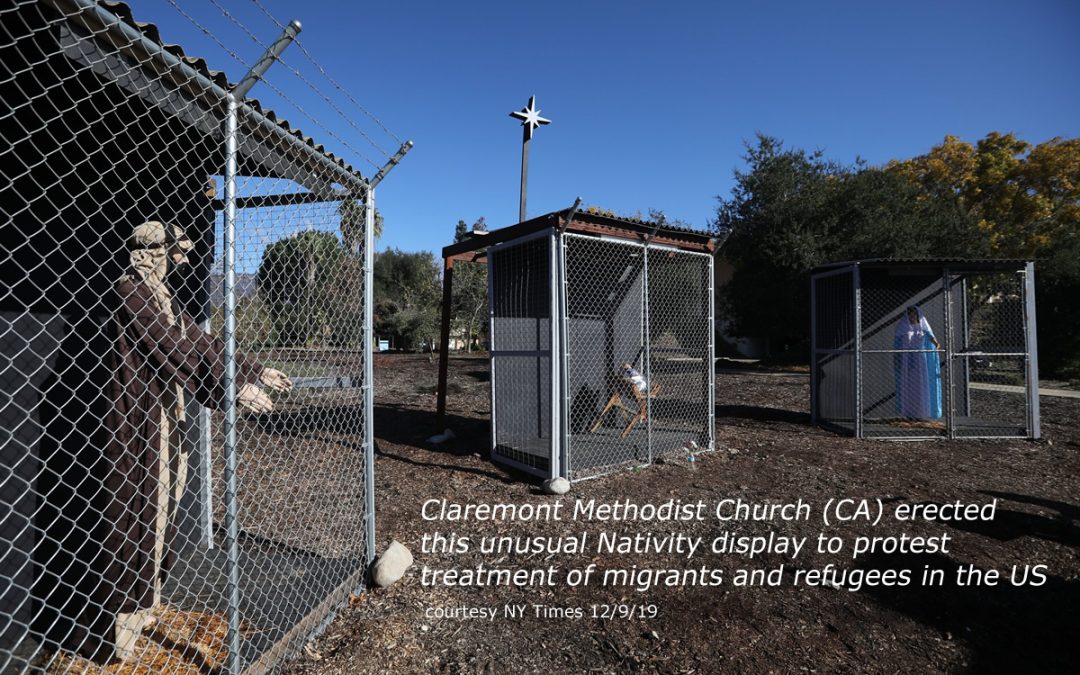 As I write this, the holiday season with all its emphasis on frenzied gift buying is again upon us, along with the first trickle of election season ads by billionaires seeking to buy the election, as if everything, including the presidency, were a Black Friday commodity. And maybe it has come to that. What I like about the Christmas season is the old value, not heard about as much in these times of “Peace on Earth and Goodwill.” It used to bother me that this ideal was so seasonal and short-lived. As I look around today it seems so retro – at least officially. This has been an eventful year in our area, our state, our country and around the world. This is a good time for us to look back at some of the highlights of the last year and to look forward to our hopes for the next.

The values of peace and goodwill have taken quite a battering over the last year. The vicious treatment of refugees seeking asylum in our country has included attacks on families, the separation, imprisonment and brutal treatment of children, and attempts to end the Deferred Action for Childhood Arrivals (DACA) program which would result in deporting many people who know no other home. At the same time, our government has continued devastating economic embargoes against Venezuela, Iran and Cuba and fostered and backed an increasingly bloody military coup in Bolivia. The present administration continues to support vicious and brutal human rights abuses in Brazil, Chile, Israel, Saudi Arabia and elsewhere – all of which exacerbate the creation of desperate refugees.

On a positive note, citizen resistance has seen some success. Here in Norfolk some of us actively welcome and assist arriving immigrants. In response to local pressure, Sheriff Joe Barron ended a contract he had made with ICE to hold undocumented immigrants in our city jail.

Last year also saw resistance to the placing of a dangerous high pressure natural gas transmission pipeline, capable of explosive rupture, through populous communities in our area and through our downtown. This pipeline, The Southside Connector, was installed against the will of local citizens. It can still be shut off if it does not blow up first.

The water has continued to rise in our area over the last year with “sunny day flooding” becoming the norm. As the latest climate assessment, issued by the United Nations Environment Program warns, we are on track for much worse. Its authors tell us that deeper and faster cuts to fossil fuel burning and carbon output are now required. Meanwhile our carbon emissions continue to grow by the year and the Trump administration continues to deny the problem, rolling back limits on pollutants and carbon emissions.

This year has also seen massive and increasing citizen activism. People are in streets around the world protesting economic injustice, corruption, and demanding action on the climate issue. We witnessed the growth of climate strikes started by teenager Greta Thurnberg and the expansion of Extinction Rebellion civil disobedience as young people fight for a livable future.

In our own state, in response to citizen pressure, Dominion Energy agreed to let regulators remove a Southwest Virginia power plant that relies almost entirely on coal from a renewable energy portfolio being promoted as a “100 percent renewable energy.” A State Corporation Commission (SCC) report found Dominion collected $277 million more from its Virginia customers last year that it should have, overcharging us for the second year in a row. Recently the SCC rejected a request from Dominion Energy that would have raised the utility’s profit margin even more through increases in user rates.

This year also saw the electoral victory and consolidation of our state legislature by Democrats which included a record number of women elected. As reported in Virginia Mercury, “a record 30 women (six newly elected) will hold seats in the House of Delegates when the 2020 session convenes. For the first time in 400 years, a woman will preside as speaker over the oldest continuously-meeting legislative body in the Western Hemisphere.”

In Portsmouth, Stephanie Morales, one of only a handful of prosecutors who has prosecuted and won a conviction in the case of a white police officer who killed a black person, won her re-election campaign. This is an indication of public support for a strong response to police violence.

The control of our state legislature by Democrats, and more importantly, the defeat of Republicans who aligned themselves with Trump, gives us some hope for the coming year. Without the blockage created by Republicans in the past, we may at long last see the expansion of Medicaid in our state. We have been paying for this expansion, begun under the Affordable Care Act, but Republicans have blocked increased access to about 400,000 low-income adults in our state. This expansion of access is long overdue.

Dr. Anna Jeng, a local member of the Virginia State Board of Health, tells me that she hopes to see not only the expansion of Medicaid but of mental health services, noting that at present Virginia is ranked 38th in the country and has been in the top 10 of states with the greatest rates of need for metal health services. She also hopes to see an expansion of funding for women’s reproductive rights and health services as well. She states that “Over 92% of Virginia cities or counties have no abortion provider and the remaining facilities are clustered in five urban areas. Evidenced-based laws should be proposed to expand the number of women’s health clinics to replace those closed since the “pro-life” movement gained the upper hand in 2011.”

We may, at long last, become the 38th state to ratify the Equal Rights Amendment, outlawing gender-based discrimination and making it the law of the land nationally. We may also see limits finally placed on public access to military style semi-automatic high capacity weapons.

With Democrats in control we may see an end to gerrymandering, voter suppression, and attacks on voter rights in our state. Though it remains an uphill struggle against corporate Democrats, me cold see the “right to work” (for less) law finally overturned. In the General Assembly, Delegate Lee Carter says that he is again introducing repeal legislation as he did in the 2019 session, while Delegate Jennifer Carroll Foy and other progressive legislators are lining up to support the effort..

We are also more likely to see cannabis finally decriminalized or even made legal for public consumption as it is in other states.

Hopefully, we will also see an end to our state’s cooperation with the immigration abuses by ICE, including the imprisoning and abuse of migrant children in our state in places like the Shenandoah Valley Juvenile Center and to the defense and expansion of civil rights in our commonwealth.

We might also hope for an overdue crackdown on the hate groups which have metastasized in recent years, fertilized by the extreme-right hyper-nationalism pushed by the divisive disinformation media of talk-radio, FOX “news,” connected Evangelic leaders, and by Trump. We can also hope for and demand the removal of people connected to hate groups from positions of power in our government, military, and law enforcement.

As this year gives way to the maddening circus of the electoral season, we can hope for an end to the blatant criminality and short-sighted attacks on public safety and our environment by this corrupt administration and to its replacement by leadership willing to stand up to the undue influence of big money interests in addressing the growing existential threat of the climate catastrophe. We should know by their records and their campaign backing who that is and who it is not. It isn’t corporate funded centrists or billionaires like Michael Bloomberg who recently kicked off his campaign here in Norfolk after dumping $30 billion into TV ads.

Returning to the Christmas theme of Peace on Earth and Goodwill, let us be proud of our efforts as Virginians in rolling back reaction and hate in our state. Let’s keep the pressure on to make sure this momentum continues here and beyond our state borders. Let’s keep those values in mind over the coming year even in the cultivated partisan division of election campaigns, realizing that our neighbors and co-workers are not our enemy even if we disagree with them. Let us continue to work for peace, an end to nuclear madness and to international meddling and aggressions. Let us welcome the strangers among us and work to end policies that impoverish and that punish the poor even as they enrich a few at the expense of a livable future.

Here’s to a happy holiday season, a better year and a future we can believe in.