Mal Vincent has left the screening room.
You are missed.

Would it be that Tennessee Williams and Charles Nelson Reilly had had an assignation and then given birth to a child (with the assistance of one heck of a patient surrogate of course), the result would been Malvern aka Mal Vincent.

For over five decades, Mal was a film and theatre critic and entertainment feature writer for The Virginian Pilot, a highly awarded and well-respected daily newspaper serving Greater Hampton Roads Virginia. Truth be told, it was quite amazing that this relatively modest market reach pub had a person dedicated to that beat. I know of no other example. One can easily conclude that Mal willed himself into the job, created his own footprint and then became a force of nature associated with nearly every film premiere and show opening during his long successful reign. While the reader base may have been modest, Mal converted most of it into audience members. The original influencer.

Mal Vincent was most of all synonymous with film and Hollywood. For readers he was their peek into Tinsel town, and before those last four letters fell off that sign in the hills, HollywoodLand. He was there in person at every junket before the word was invented. He had access to the “A” List as he gained the stars trust, not by always praising them, rather by being one among them. Knowing all about them and their business. By tracking them down quietly in the background. By providing them with his own stories and value, like the time his native North Carolina accent was put in to service for no less than Lord Laurence Oliver who needed tips on a southern accent for an upcoming role. And for always sending their flacks his coverage the moment it was filed copy. He was front row every year at Lucille Ball’s annual press event. When a tour of a Paul Lynde comedy played town and Mal was not impressed, Lynde (perhaps under the influence) tracked Mal down to complain of his perceived impact on the box office. “Mr. Vincent, I have been reviewing the box office reports of my tour…” Stars understood Mal’s impact.

Mal was also a huge champion of local theatre. He shared with me, that was his time to be a singular voice and advocate for local arts. Not one of many in a national press pool. Reviewer, reporter and profile writer. And there was a huge amount of activity. Once upon a time there were more theatrical openings in Hampton Roads than on Broadway. I was amazed that Mal would attend the opening night and file copy that same said night. The middle of the night was his favorite time to file. Many of those early hours of the new day I would be getting the first copy from the newspaper box in front of the Brambleton Avenue offices just as Mal was leaving the building.

I was reader for as long as I could read. As an elementary school student, I wrote to Mal to disagree with a review of his. He wrote back. Disagree. Just go to plays, musicals and movies. Okay, Mal, you were right on all counts (Darling Lili was indeed deeply flawed). And that extends to all that you ever wrote about my own work. When you called out that I missed the mark with a particular production, well I had missed the mark. And when you praised it, it may be somehow I had gotten something right.

And what an experience it was to pitch Mal a story. Marilyn An American Fable had been a colossal bomb on Broadway. I got the rights to rework it and present in Virginia. Press and marketing would be the only way to make this revisited failure an audience hit. The search for our new Marilyn was the chord to kick it off with Mal and it would result in the theatre’s longest running show.

When, right out of college, as I commenced my own professional career in the theatre including founding the Generic Theatre and then Artistic Director for the Tidewater Dinner Theatre, I was under the constant inspection of the great Mr. Vincent. I welcomed it all. I just didn’t want to be left out as I understood that all theatergoers read him. When I moved to New York so many decades ago, I would reach out when he was in town on his press junkets. When I returned to Norfolk to present a one person show about my own theatrical journey at the Generic seven years ago, Mal was there both in person and in creating the advance piece. What joy to engage again. When he called me, it was just a given to set aside at least an hour. When I reached out, there was only the joy of his voicemail. ‘We are busy, busy, busy.” And what he was busy with was chasing or closing his next byline

Mal’s taste ranged from Ava Gardner to Mitzi Gaynor. Once when he arrived at the theatre to review a new Blues musical revue I had co-created, he saw the show’s title in neon in the window. He mumbled “really Ron, Mr. Bennett waited months before he put A Chorus Line in neon at the Shubert. Are you sure this revue will be around long enough.” Pure Mal. Hope you are gossiping about the theatre scene with Gene Hammett right now. Your beat will be retired and there is no one to fill your shoes. You will be missed. 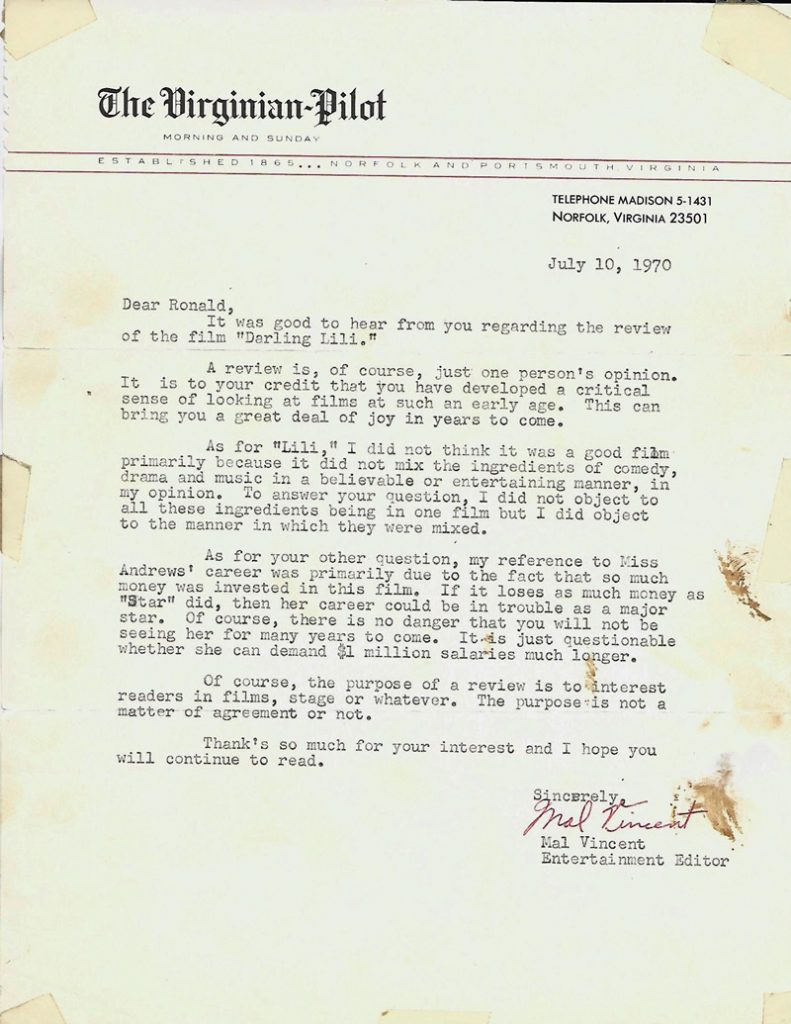