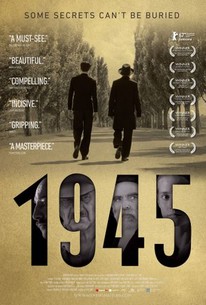 On a summer day after the end of World War II in 1945, an Orthodox Jewish man and his grown son return to a village in Hungary while the villagers prepare for the wedding of the town clerk’s son. The townspeople – suspicious and remorseful – fear that the men may be heirs of the village’s deported Jews and expect them to demand their stolen property back. Director Ferenc Török paints a complex picture of a small town’s guilt and denial of their recent horrors perpetrated on their fellow countrymen for their own personal gain. A superb ensemble cast, lustrous black and white cinematography, and historically detailed art direction contribute to an eloquent drama. In Hungarian with subtitles. (91 mins)

“Simple, powerful, made with conviction and skill, 1945 proceeds as inexorably as Sámuel and his son on their long walk into town. It’s a potent messenger about a time that is gone but whose issues and difficulties are not even close to being past.” – Kenneth Turan, Los Angeles Times