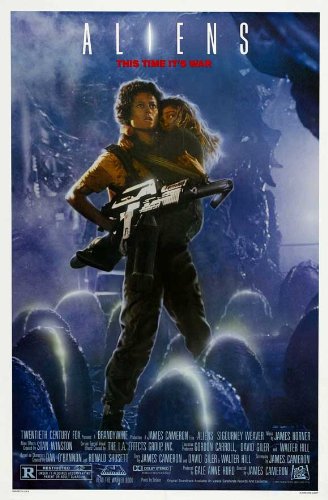 In this blockbuster sequel (and seven-time Oscar nominee) from writer/director James Cameron, Sigourney Weaver returns as Ellen Ripley, the last surviving crew member of a corporate spaceship destroyed by a vicious alien life form. Rescued by a deep salvage team during her hypersleep, Ripley learns that the planet where her crew discovered the alien has since been settled by colonists, but contact with the colony has been lost. Colonial marines, along with Ripley as an advisor, are sent to investigate — but will their impressive firepower be enough? Several future stars made early career appearances in Aliens, including Lance Henriksen, the late Bill Paxton, and Paul Reiser. (1986, R, 138mins)

“Sigourney Weaver is merely terrific… When she straps on her armament to do battle with the aliens, she makes Sylvester Stallone look like a pipsqueak.” – Bob Thomas, Associated Press