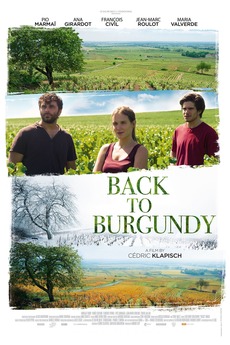 Click Here to visit official site.
Back To Burgundy

Three siblings reunite at their home in picturesque Burgundy to save the family vineyard in this tender tale of a new generation finding its own unique blend from acclaimed director Cédric Klapisch (L’Auberge Espagnole). Jean (Pio Marmaï), the black sheep of the family, unexpectedly returns home from a decade abroad to reconnect with his hospitalized father. He’s welcomed by his strong-willed sister, Juliette (Ana Girardot), who took over the reins of the vineyard after their father fell ill, and Jeremie (François Civil), the youngest of the three who has recently married into one of the region’s more prestigious wine families. Their father passes shortly after Jean’s return, leaving them with the estate and a looming inheritance tax of half a million dollars. As four seasons and two harvests go by, Jean, Juliette, and Jeremie must reinvent their relationship and trust in each other as they work to preserve their vineyard. In French with subtitles. (113 mins)

“Though not a documentary, this gorgeous French family saga benefits enormously from Klapisch’s natural curiosity, informed by research (he participated in a harvest in order to observe its nuances) and elevated by his insistence that they film over the course of a full year, so as to capture the impact of the seasons on both viticulture and its human stewards.” – Peter deBruge, Variety

“A film so rich and pleasurable you’d be forgiven if you thought about it each time you have a glass of red.” – G. Allen Johnson, San Francisco Chronicle