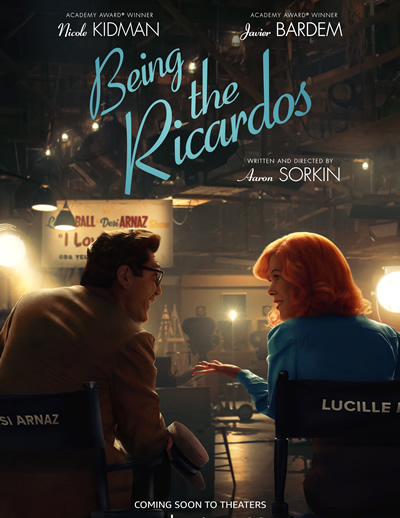 Lucille Ball (Nicole Kidman) and Desi Arnaz (Javier Bardem) are threatened by shocking personal accusations, a political smear and cultural taboos in Academy Award winning writer and director Aaron Sorkin’s (A Few Good Men, The Social Network, Steve Jobs, Moneyball, The Trial of the Chicago 7) behind-the-scenes drama. A revealing glimpse of the couple’s complex romantic and professional relationship, the film takes audiences into the writers’ room, onto the soundstage and behind closed doors with Ball and Arnaz during one critical production week of their groundbreaking sitcom “I Love Lucy.” (R, 125m)

“The bottom line on Being the Ricardos is that it’s irresistible.” – Mick LaSalle, San Francisco Chronicle

“Presenting a far richer story than a simple biopic, Being the Ricardos turns writer-director Aaron Sorkin loose again on the medium of television and produces one of the year’s most satisfying movies.” – Brian Lowry, CNN.com

“Being the Ricardos is a Sorkin event through and through and an earnest, smart picture of a complex woman and, like her show, it all goes down so smoothly you barely even get a chance to appreciate the labor behind it.” – Lindsey Bahr, Associated Press

Watch and listen to a few words from Lucie Arnaz about this film: