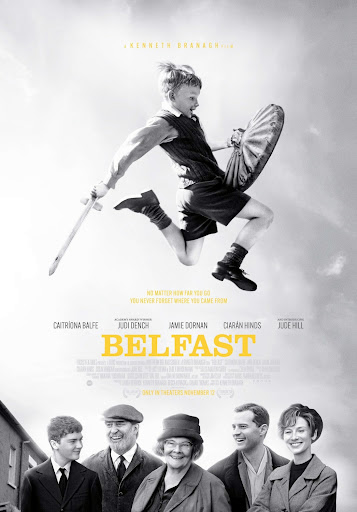 Written and directed by Academy Award® nominee Kenneth Branagh and considered by several top critics to be his crowning achievement, Belfast is a poignant story of love, laughter and loss in one boy’s childhood, amid the music and social tumult of the late 1960s. Starring Caitriona Balfe, Judi Dench, Jamie Dornan, Ciarán Hinds, and Jude Hill.  (PG-13, 108 mins)

“Belfast is Branagh’s love letter to his family, his neighborhood, a way of life that doesn’t exist any longer. It’s neither complex nor rigorous — nostalgia rarely is — but it does leave a lump in the throat.” – Max Weiss, Baltimore Magazine

“For its frequently painful contours, there’s an abundance of pleasures to be had in Belfast, Kenneth Branagh’s irresistible memoir about growing up amid the Troubles in Northern Ireland.” – Ann Hornady, Washington Post

“Above all else, Belfast expresses Branagh’s heartfelt appreciation for community and family, notably the love of two charismatic parents who manage to help everyone weather these best and worst of times.” – Randy Myers, San Jose Mercury News

“Belfast is Mr. Branagh’s love letter to his family, and seldom has a filmmaker given life to cherished memories with more tenderness or vivacity.” – Joe Morgenstern, Wall street Journal

Winner of People’s Choice Award, Toronto Film Festival and named one of the best films of 2021 by the National Board of Review.