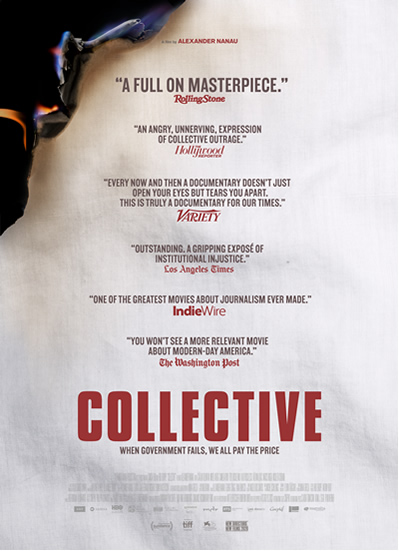 Nominated for 2 Oscars!
Best International Film and Best Documentary
This acclaimed film follows a heroic team of journalists as they uncover shocking, widespread corruption. After a deadly nightclub fire, the mysterious death of the owner of a powerful pharmaceutical firm, and the quiet resignation of a health minister—seemingly unrelated events, all within weeks of each other—the team of intrepid reporters exposes a much larger, much more explosive political scandal. Collective is a fast-paced, real-time detective story about truth, accountability, and the value of an independent press in partisan times. Directed by Alexander Nanau (Toto and His Sisters). Subtitled. (109 mins)

“It plays like a political thriller. But it’s also a deeply moving testament to both the power and the necessity of investigative journalism…” – Stephanie Zacharek, Time Magazine

“One can’t watch the Romanian documentary Collective without feeling as if the film is a snapshot of America’s future.” – Roger Moore, Movie Nation