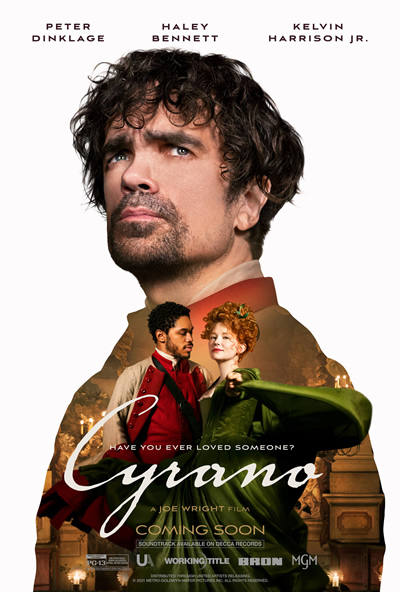 Starring award-winning actor Peter Dinklage, Haley Bennett and Kelvin Harrison Jr, new musical drama Cyrano is a modern reimagining of a classic love story – in particular, the 1897 French play Cyrano de Bergerac, which is based on a heartbreaking love triangle. Award-winning director Joe Wright envelops moviegoers in a symphony of emotions with music, romance, and beauty in Cyrano. A man ahead of his time, Cyrano de Bergerac (Peter Dinklage) dazzles whether with ferocious wordplay at a verbal joust or with brilliant swordplay in a duel. But, convinced that his appearance renders him unworthy of the love of a devoted friend, the luminous Roxanne (Haley Bennett), Cyrano has yet to declare his feelings for her — and Roxanne has fallen in love, at first sight, with Christian (Kelvin Harrison, Jr.). (124m)

“An old-school enchanter with an enormous heart, one that reinforces Dinklage as a dazzling talent that can lead and illuminate any genre.” – Tomris Laffly, RogerEbert.com

“Dinklage saves the day, being worldly, wry, and mournfully amused at the cruelties of fate. Even his swordplay has a comic agility; talk about a rapier wit.” – Anthony Lane, New Yorker

“Wright – whom I consider one of the medium’s most visionary craftsman – has outdone himself in devising original, cinematically innovative ways to stage the film.” – Peter Debruge, Variety