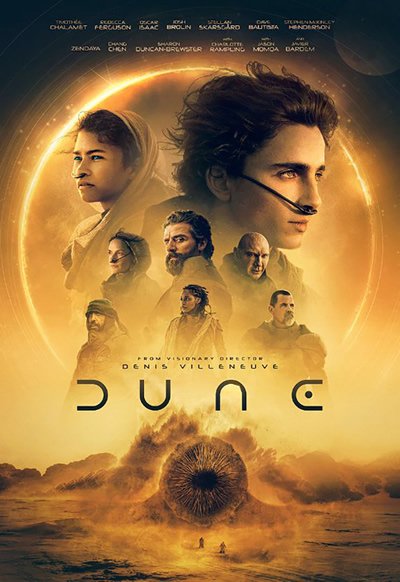 10 Oscar Nominations including for Best Picture!

Paul Atreides, a brilliant and gifted young man born into a great destiny beyond his understanding, must travel to the most dangerous planet in the universe to ensure the future of his family and his people. As malevolent forces explode into conflict over the planet’s exclusive supply of the most precious resource in existence, only those who can conquer their own fear will survive. Critics are acclaiming this as a definitive rendering of Frank Herbert’s classic science fiction novel. You will want to experience Dune in all of its big screen glory and magnificent digital surround-sound. Directed by Denis Villeneuve (Arrival, Blade Runner 2049, Incendies) (2021, 2h35m)

“Villeneuve has made a serious, stately opus, and while he doesn’t have a pop bone in his body, he knows how to put on a show as he fans a timely argument about who gets to play the hero now.” – Manohla Dargis, NY Times

“The director Denis Villeneuve’s film is the first adaptation of Frank Herbert’s novel to properly portray the grim tragedy of Paul’s arc; the movie is epic in scope, but it understands the quieter human underpinnings of the original work.” – David Sims, The Atlantic

“…a wonderful, satisfying film version of “Dune” — the first movie I’ve seen in a theater since the pandemic began. ..all of us former bookish 14-year-olds finally have the “Dune” movie we always wanted to see.”  – Paul Krugman, NY Times (Nobel-winning economist and sci-fi nut. Read his full column on Dune here.)