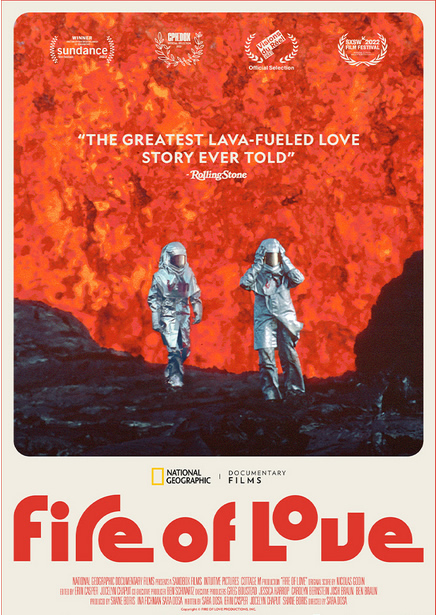 Wednesday, August 24th at 7:15pm
Join us for a special one night only screening of Fire of Love followed by a prerecorded Q&A with director Sara Dosa.

The story of two French lovers, Katia and Maurice Krafft, who died in a volcanic explosion doing the very thing that brought them together: unraveling the mysteries of our planet, while simultaneously capturing the most explosive volcano imagery ever recorded. Along the way, they changed our understanding of the natural world, and saved tens of thousands of lives. Previously unseen hours of pristine 16-millimeter film and thousands of photographs reveal the birth of modern volcanology through an unlikely lens — the love of its two pioneers. (PG-13, 93m)

“The result is more than a mere nature documentary. It is one of the most moving and mesmerizing films of the year, a meditation on the wonders of nature and human curiosity.” – Shirley Li, The Atlantic

“The way Dosa shapes the story, emphasizing the couple’s deep love for each other and their unconventional lives, is what makes Fire of Love…one of the most moving and memorable films of 2022.” – G. Allen Johnson, San Francisco Chronicle

“It is spectacular. You have to see it in a theater to experience the enormity of it” – Christy Lemire, FilmWeek (NPR)