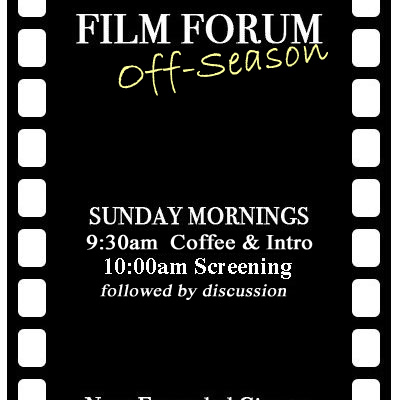 9:30am – Coffee, conversation, and film introduction

The aroma of piping-hot, fresh-brewed coffee welcomes you to the Naro. All other concession items will also be available for purchase. Brunch will not be included during the Off–Season film events.

Rate the film and share your own opinion with our guest hosts.

Film Forum Off-Season admission – $10 purchased at the door for each film. No advance season membership pass is available for the Off–Season. Discount ticket books are valid for Off–Season.

Click here to find out the title of the 6/9 Film Forum.