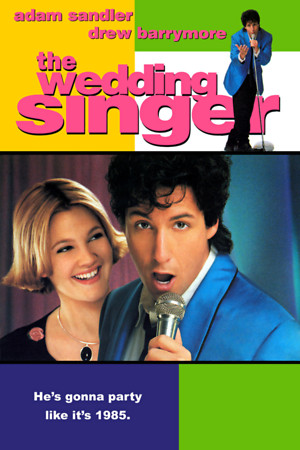 Set in 1985, Robbie Hart (Adam Sandler) is a vocalist whose rock band stubbornly refuses to get off the ground. He makes a living playing wedding receptions, where his easy charm and ability to schmooze brings him a steady income. When Robbie gets stood up at the altar, he loses all hope and considers giving up on music altogether. He meets a young woman named Julia (Drew Barrymore), who enlists his help to plan her own wedding. He soon falls in love with her and must win her over before she gets married to her obnoxious, self-obsessed fiancé who is chronically unfaithful to her. With appearances from Kevin Nealon, Jon Lovitz, Steve Buscemi, and Billy Idol. (1998, PG-13, 96mins)