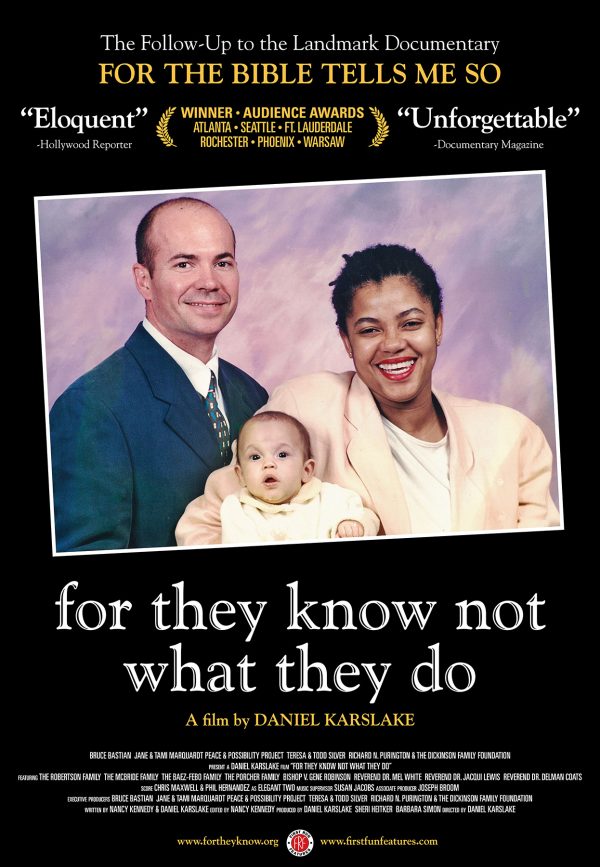 For They Know Not What They Do

The arrival of marriage equality was seen by many as the pinnacle achievement of the march toward full equality for LGBTQ people. But for many on the Right, it was the last straw, and their public backlash has been swift, severe and successful. In collaboration with religious conservatives, politicians are invoking both the Bible and the U.S. Constitution in their campaigns for the ‘religious freedom’ to legally discriminate. By telling the stories of four families struggling with these issues, the film offers healing and understanding to those caught in the crosshairs of scripture, sexuality, and identity. (92 mins)

$10.00 Click Here to view via First Run Features and your rental price will support the Naro!
(You will be emailed instructions from First Run Features to view the film. Watch via your Computer, Tablet, or Smartphone ∙ Cast via Chromecast or Airplay ∙ Or connect your computer or mobile device to your TV using an HDMI cord.)

“‘For They Know Not What They Do’ is an example of the power of documentary film. There is not hate within its message, just the intent to showcase what currently exists.” – Stephanie Archer, Film Inquiry

“Grounded in the stories of four LGBTQ people, ‘For They Know Not What They Do’ is an essential documentary and should be a must-watch for everyone.” – Danielle Solzman, Solzy at the Movies

“‘For They Know Not What They Do’ is by turns full of hope and full of heartbreak.” – Lorry Kikta, Film Threat