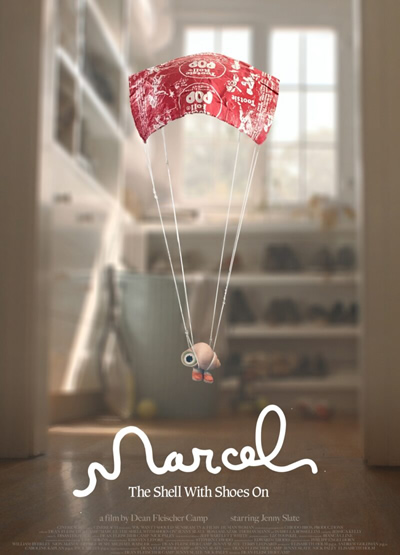 Marcel The Shell With Shoes On

Marcel is an adorable one-inch-tall shell who ekes out a colorful existence with his grandmother Connie and their pet lint, Alan. Once part of a sprawling community of shells, they now live alone as the sole survivors of a mysterious tragedy. But when a documentary filmmaker discovers them amongst the clutter of his Airbnb, the short film he posts online brings Marcel millions of passionate fans, as well as unprecedented dangers and a new hope at finding his long-lost family. A beloved character gets his big-screen debut in this hilarious and heartwarming story about finding connection in the smallest corners.  Featuring the voice of co-writer/ producer Jennie Slate and starring Isabella Rossellini, Thomas Mann, and Rosa Salazar. 99% RT critics score, 94% audience score (PG, 1h 29m)

“This unassuming animated gem about a shell (indelibly voiced by co-writer Jenny Slate) trying to find his family shames the bloat of big-studio cartoons by proving good things really do come in small packages. The result is unique and unforgettable.” – Peter Travers, ABC News

“Marcel the Shell with Shoes On will make your spirit soar and remind you to enjoy those you love, inhale a bit of fresh air, and respect the earth every second as though it were your very first time.” – Carla Renata, RogerEbert.com