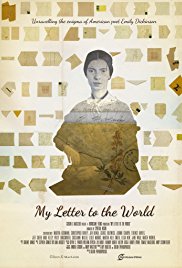 Click Here to visit official site.
My Letter To The World: Emily Dickinson

MY LETTER TO THE WORLD: Unraveling the Enigma of Emily Dickinson The great American poet has spent the 130 years since her death unfairly pigeon holed as the strange recluse in white. This new documentary is an in-depth exploration of her life and work, filmed in her hometown of Amherst, Massachusetts and narrated by Cynthia Nixon, the actress who played Emily in last year’s acclaimed film A Quiet Passion. This documentary journeys through the seasons of Emily’s life amid 1800s New England and features interviews with world experts, bringing to light new theories about the poet’s personal relationships and revered work. (80 mins)