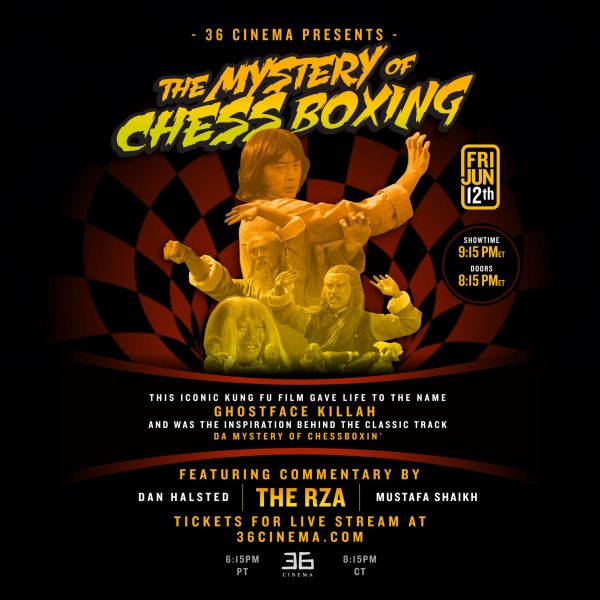 On Friday, June 12th, at 9:15pm, we will be live-streaming Mystery Of Chess Boxing on 36cinema.com. RZA—acclaimed rapper, producer, director, and co-founder of 36 Chambers—and Dan Halsted—head programmer at the Hollywood Theatre—will provide live commentary during this special presentation. Their collective knowledge and personal stories related to Mystery Of Chess Boxing will give viewers a deeper appreciation for the movies we love.

Doors open at 8:15pm with the movie starting at 9:15pm. Customers will receive a link to the live stream 1 hour prior to showtime. Mystery Of Chess Boxing has a runtime of 90 minutes.

About The Movie
MYSTERY OF CHESS BOXING is an instrumental piece of Wu-Tang lore. The old school Kung Fu movie follows Ah Pao on his journey to learn Kung Fu so he can avenge his father’s death. The film is directed by Taiwanese film director Joseph Kuo, who also helmed 7 Grandmasters, 36 Deadly Styles, and 18 Bronzemen.

Wu-Tang Clan fans will immediately recognize that the track “Da Mystery of Chessboxin’” pays homage to the movie. Ghostface Killah also derived his name from the antagonist of the film.

$10.00 Click Here to view via 36chambers and your rental price will support the Naro!
(You will be emailed instructions from 36chambers to view the film. Watch via computer, tablet, or Chromecast.)

Special thanks to The Hollywood Theatre. Bringing this film to 36 Cinema would not have been possible without their help.