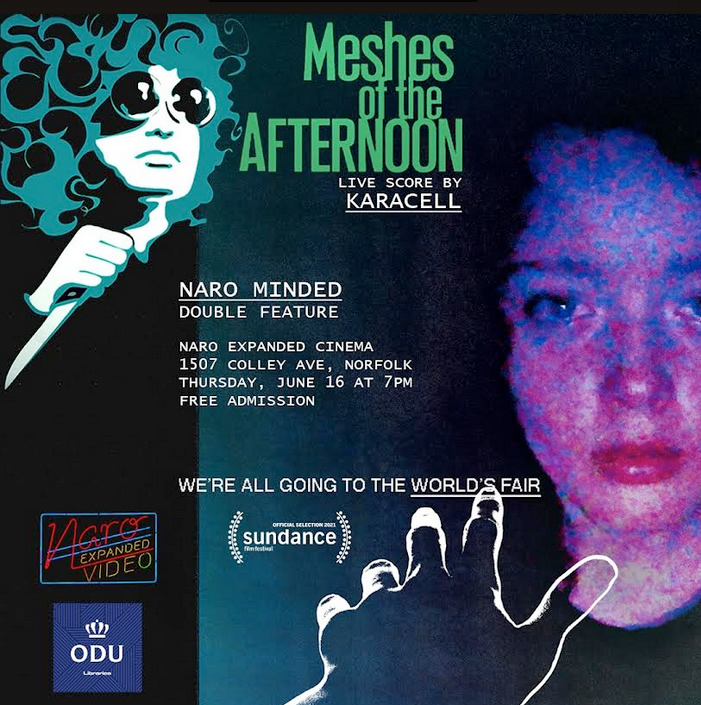 The June “Naro Minded” program showcases ODU and Naro Video Collection’s continued dedication to the works of radical, female, and LGBTQ artists and will feature Maya Deren’s short film Meshes of the Afternoon (1943) with a new score performed live by Norfolk electronic artist Karacell, followed by director Jane Schoenbrun’s debut feature We’re All Going to the World’s Fair (2021). Naro Video’s Linda McGreevy will be on hand to introduce.

A defining radical of the 20th century, Ukrainian-American filmmaker Maya Deren revolutionized American filmmaking with work that defies traditional narrative and structure. In Meshes of the Afternoon, Deren explores notions of isolation, identity and self-destruction with a dancer’s grace, following a young woman as she spirals through a haunted dream space.

Jane Schoenbrun explores similar themes in her eerie, dissociative debut We’re All Going to the World’s Fair, about a lonely young woman – Casey – who loses herself in an online horror game. As she made the film, Schoenbrun realized she was coming to terms with her own dysphoria, and uses Casey’s life online to articulate the internal struggle of the trans experience.

In 2020, ODU Libraries received a generous donation of over 42,000 blu-rays, DVDs and VHS tapes from Tim Cooper and Linda McGreevy, the proprietors of the legendary Naro Expanded Video in Ghent. As plans for a permanent display are realized to showcase the collection, ODU Libraries welcome local filmgoers to the free “Naro Minded” screening to preview of the collection’s return to Norfolk and explore its transformative power.

Reservations are not required.