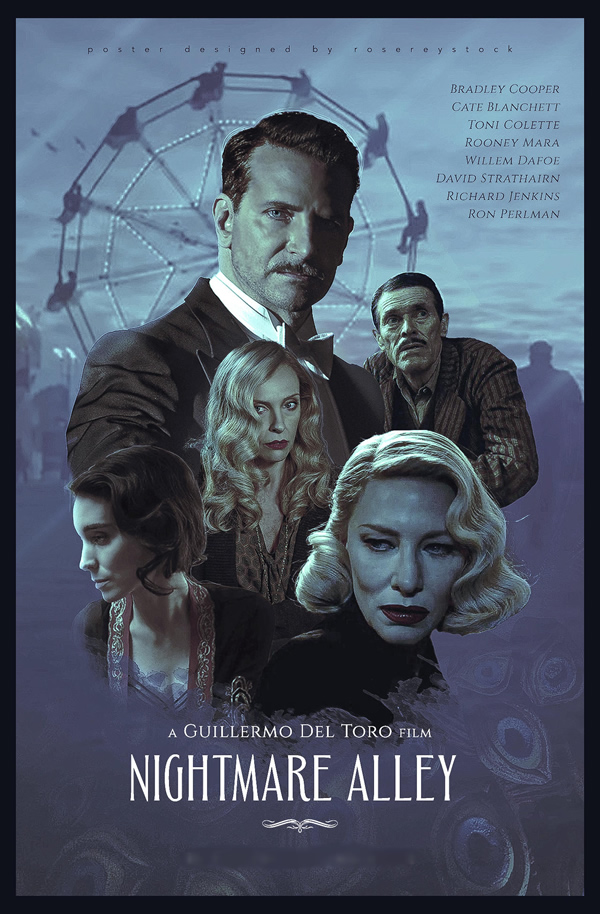 When charismatic but down-on-his-luck Stanton Carlisle (Bradley Cooper) endears himself to clairvoyant Zeena (Toni Collette) and her has-been mentalist husband Pete (David Strathairn) at a traveling carnival, he crafts a golden ticket to success, using this newly acquired knowledge to grift the wealthy elite of 1940s New York society. With the virtuous Molly (Rooney Mara) loyally by his side, Stanton plots to con a dangerous tycoon (Richard Jenkins) with the aid of a mysterious psychiatrist (Cate Blanchett) who might be his most formidable opponent yet. Directed by two-time Academy Award winner Guillermo del Toro (Best Director Oscars for Pan’s Labyrinth and The Shape of Water), this is his stunning neo-noir vision of the iconic 1940’s novel and film of the same name.  Additional all-star cast members include Willem Dafoe, Ron Pearlman, and Mary Steenburgen. (150 m)

“Seeing the picture on an enormous screen in black and white is an entirely different experience. There’s something chilling about Cooper’s eyes drained of color; his Carlisle has a new snakelike quality. The smoky atmosphere of the Art Deco office in which Dr. Ritter does her dirty work has the feel of classic Hollywood, drawing a direct line to the this film’s noir ancestors.” – Sonny Bunch, Washington Post

“This is a satisfying, fully realized film noir where the characters are more than stereotypes. Only a filmmaker as knowledgeable and passionate as Guillermo del Toro could have made this picture, and I’m awfully glad he did.” – Leonard Maltin, leonardmaltin.com

“They’re fascinatingly terrible and if they get what’s coming to ’em it’s because they deserve it, and that makes for an entertaining, wall-to-wall watch. This is an A-list rendition of a classic B-movie formula.” – Richard Roeper, Chicago Sun-Times

“Dark as del Toro’s vision may be, it’s a glorious homage to an American experience all but lost to time.” – Peter Debruge, Variety