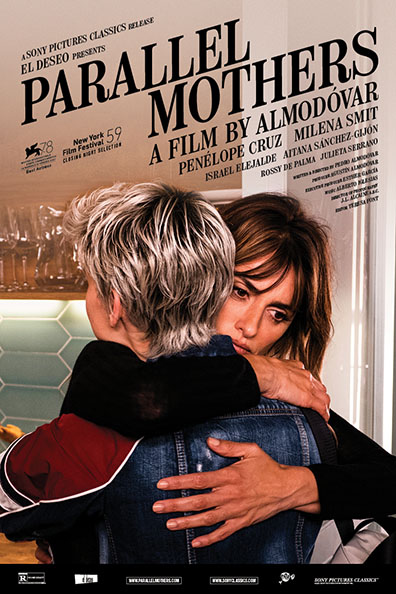 The new film from acclaimed Spanish writer/director Pedro Almodóvar, featuring Oscar-winning actress Penélope Cruz. It is the story of two women, Janis and Ana, who coincide in a hospital room where they are going to give birth. Both are single and became pregnant by accident. Janis, middle-aged, doesn’t regret it and she is exultant. The other, Ana, an adolescent, is scared, repentant and traumatized. Janis tries to encourage her while they move like sleepwalkers along the hospital corridors. The few words they exchange in these hours will create a very close link between the two, which by chance develops and complicates, and changes their lives in a decisive way. Spanish with English subtitles. (R 123m)

A critics’ favorite at the Venice and New York Film Festivals, with a 97% aggregated review rating on Rotten Tomatoes.

“Cruz is a marvel: forceful, passionate, casually sexy. There are lots of people who star in movies. There are very few honest-to-Hollywood movie stars. Cruz is one of them.” – Mark Feeney, Boston Globe

“Almodovar shows us that he’s as playful, adventurous and relevant as ever in this wickedly good and surprisingly emotional melodrama, which tackles weighty issues of history, birthright and bonds between women.” – Randy Myers, San Jose Mercury News

“The balance of light and dark, birth and death, and the power of women to create life, and to preserve memory over generations in the face of injustice, melds in a warm, humanistic and politically outspoken drama from the unflinching master.” – Thelma Adams, AARP Movies for Grownups