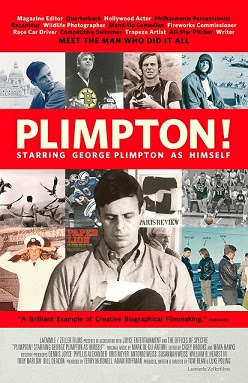 Plimpton! Starring George Plimpton as Himself

One of the great adventurers of the 20th Century, George Plimpton embarked on a lifelong journey akin to fictional characters such as Forrest Gump and Indiana Jones. He hung out with U.S. Presidents, played quarterback for the Detroit Lions, forced Willie Mays to pop out in Yankee Stadium, photographed Playboy models, was named the “Most Eligible Bachelor in Manhattan” by Esquire Magazine, played goalie for the Boston Bruins, struck the triangle for the New York Philharmonic and acted alongside John Wayne, Warren Beatty and Matt Damon. Some of these things he did well. Some he didn’t. But they were always amusing and inspiring. (89 mins)

$5.99 Click Here to view via Vimeo and your rental price will support the Naro!
(You will be emailed instructions from Vimeo to view the film. Watch via your Computer, Tablet, Smartphone, Chromecast, or through the Vimeo app on Roku or AppleTV.)

“A hell of a lot of fun. George Plimpton would heartily approve.” – Verne Gay, Newsday

“Many of you will not have heard of him. (All the more reason to watch Tom Bean and Luke Poling’s affectionate, at times intoxicating documentary.)” – Robert Lloyd, Los Angeles Times

“The film offers a front-row seat to the marvelous, fifty-year-long piece of performance art that was Plimpton’s public persona.” – Kimberley Jones, Austin Chronicle

Plimpton! Starring George Plimpton as Himself from Luke Poling on Vimeo.