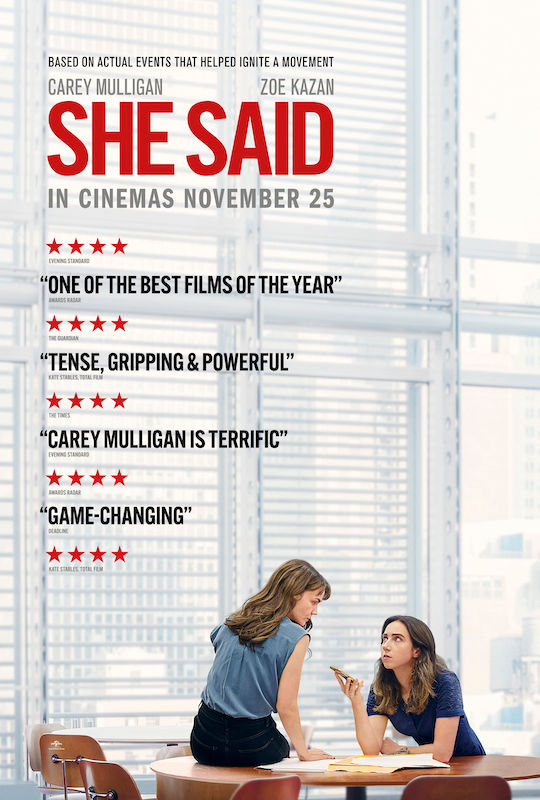 Two-time Academy Award® nominee Carey Mulligan (Promising Young Woman, An Education) and Zoe Kazan (The Plot Against America limited series, The Big Sick) star as New York Times reporters Megan Twohey and Jodi Kantor, who together broke one of the most important stories in a generation–a story that helped propel the #Metoo movement, shattered decades of silence around the subject of sexual assault in Hollywood and altered American culture forever. Directed by Maria Schrader. (R, 2h 9m)

“With care, thoughtfulness and rigor, Schrader and the filmmakers of She Said craft a film that shows the process of building this paradigm-shifting piece of journalism in a manner that is simultaneously thrilling and grindingly methodical…” – Katie Walsh, Tribune News Service

“She Said is a very measured movie — it makes Spotlight look bombastic in comparison — that never hits a false note. On the record, it’s absolutely one of the year’s best.” – Adam Graham, Detroit News

“A riveting cinematic quest for journalistic truth – especially one like She Said – which tackles an issue that means so much to so many – should always be embraced, no matter the era.” Brian Truitt, USA Today

“She Said gets it right in showing the work that went into exposing Harvey Weinstein.” – Richard Roeper, Chicago Sun-Times