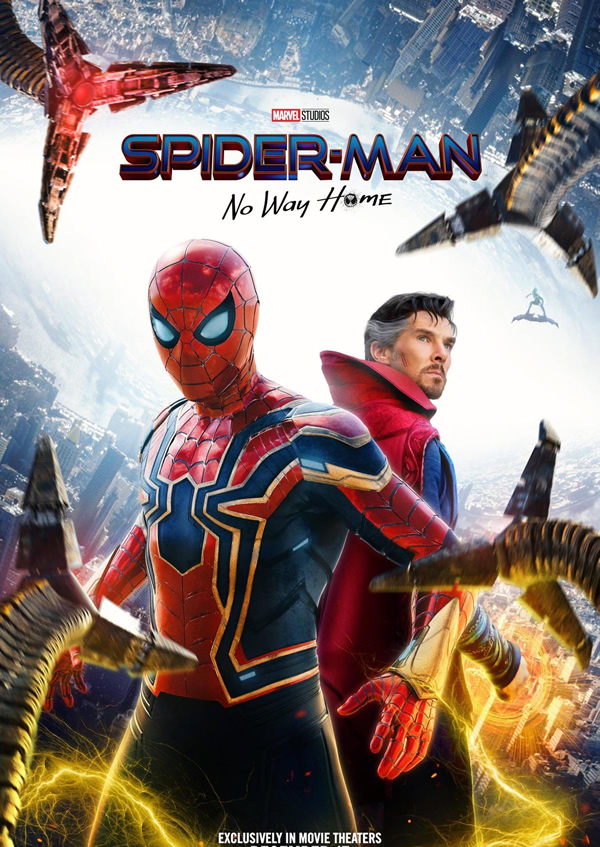 For the first time in the cinematic history of Spider-Man (Tom Holland), our friendly neighborhood hero’s identity is revealed, bringing his Super Hero responsibilities into conflict with his normal life and putting those he cares about most at risk. When he enlists Doctor Strange’s (Benedict Cumberbatch) help to restore his secret, the spell tears a hole in their world, releasing the most powerful villains who’ve ever fought a Spider-Man in any universe. Now, Peter will have to overcome his greatest challenge yet, which will not only forever alter his own future but the future of the Multiverse. (PG-13, 148 m)

“Tom Holland is better than ever in his surprise-packed, third solo outing as a teen hero in a onesie who’s out to save the world and a faltering pandemic box office. But this time the generic thrills are tempered with genuine emotion. Good one, Spidey.” – Peter Travers, ABC News

“The filmmakers put their faith in a character, not fireworks, and the result is big blockbuster that feels more like a sweet little movie.” – Mick LaSalle, San Francisco Chronicle

“Those who meticulously study the Marvel universe will find lots to happily debate here, but those of us with a more casual connection to superhero movies will simply have a rollicking good time.” – Moira MacDonald, Seattle Times