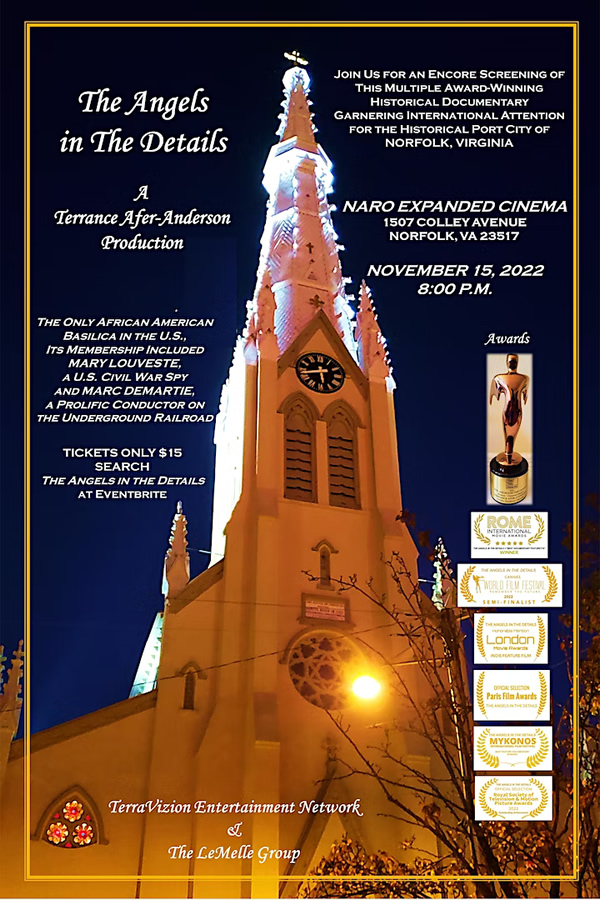 Click Here to visit official site.
The Angels in the Details

Norfolk’s Basilica of St. Mary of the Immaculate is the only African American Catholic Basilica in the U.S. and has an astonishing history. Its membership has included the likes of Civil War spy Mary Louveste, a free black woman who in 1862 secreted the plans for Confederate conversion of the sunken, former Union ship the Merrimac into the CSS Virginia and shared them with U.S. Secretary of the Navy Gideon Welles. It was also the home of Marc Demartie, who at age 18, became a prolific conductor on the Norfolk branch of the Underground Railroad. During its recent $6.7 million renovation, the Basilica discovered two underground tunnels and a cemetery beneath the church and exhumed 12 human remains, several believed to be of African descent. St. Mary’s was built in 1858. Its predecessor St. Patrick’s Catholic Church, built on an immediately adjacent grounds, was burned to the ground by a radical racist group called the Know Nothings, not only because it had Black members but was believed to be conducting interracial marriages. The only thing that survived the fire that consumed the wooden church was a wooden statue of the crucifix, housed today in the Basilica’s chapel. The kneelers in its choir loft still bear the knee prints of slaves and free blacks who would attend service there.

All tickets $15 – purchase online here. (Naro ticket books not valid for this event.)