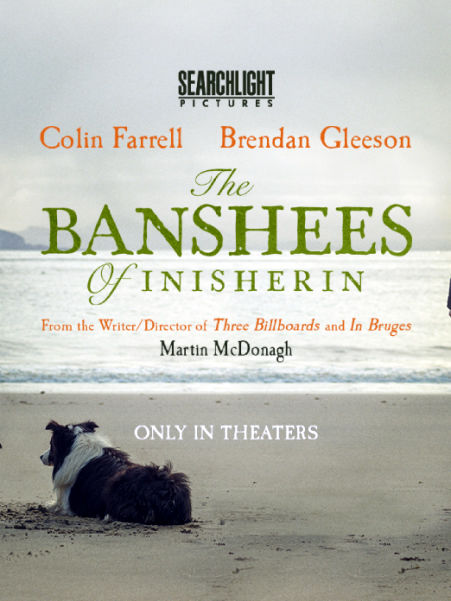 The Banshees of Inisherin

Set on a remote island off the west coast of Ireland, the film follows lifelong friends Pádraic (Colin Farrell) and Colm (Brendan Gleason), who find themselves at an impasse when Colm unexpectedly puts an end to their friendship. A stunned Pádraic, aided by his sister Siobhán and troubled young islander Dominic, endeavours to repair the relationship, refusing to take no for an answer. But Pádraic’s repeated efforts only strengthen his former friend’s resolve and when Colm delivers a desperate ultimatum, events swiftly escalate, with shocking consequences. (R, 1h 49m)

“Give Martin McDonagh a topic like friendship to tackle, and he’s bound to warp it into something so subversive, so twisted, so extreme … that you’ll laugh your ass off for two full hours.” – Johnny Oleksinski, NY Post

“The writer-director’s superbly acted fourth feature is his most Irish work for the screen to date, and also one of his best.” – David Rooney, Hollywood Reporter