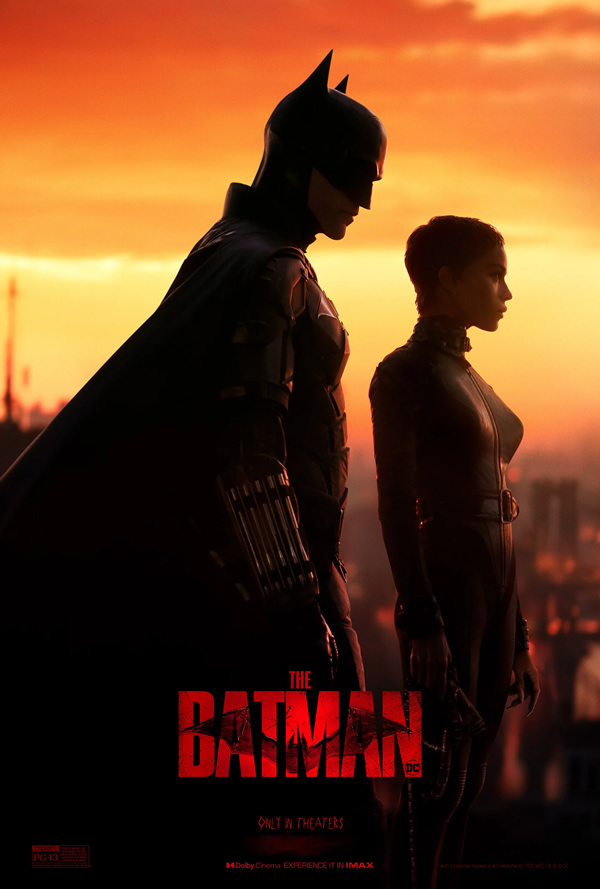 Batman ventures into Gotham City’s underworld when a sadistic killer leaves behind a trail of cryptic clues. As the evidence begins to lead closer to home and the scale of the perpetrator’s plans become clear, he must forge new relationships, unmask the culprit and bring justice to the abuse of power and corruption that has long plagued the metropolis. Grim, gritty, and gripping super-noir, this latest iteration of the DC Comics super-hero saga ranks among its bleakest – and most thrillingly ambitious – live action outings. Directed by Matt Reeves and starring Robert Pattinson as Bruce Wayne/ Batman alongside Zoë Kravitz, Paul Dano, Jeffrey Wright, John Turturro, Peter Sarsgaard, Andy Serkis, and Colin Farrell. (PG-13, 2h56m)

“(Director Matt Reeves) transcends the clichés with a masterful, often tense and noir-as-night twist on the mythology that ranks with Christopher Nolan’s The Dark Knight as the best of all the Batman movies.” – Cary Darlin, Houston Chronicle

“Director Matt Reeves and brooding star Robert Pattinson see the Caped Crusader as more film-noir detective than comic-book hero in their mesmerizing mindbender that aims high even when it misses the mark. Its a grenade of pure cinema ready to blow.” – Peter Travers, ABC News

“What it does do, quite effectively, is tell a solid Batman story, with the most soulful and vulnerable Batman to ever grace the big screen. And that much, at least, is new.” – Glen Weldon, NPR