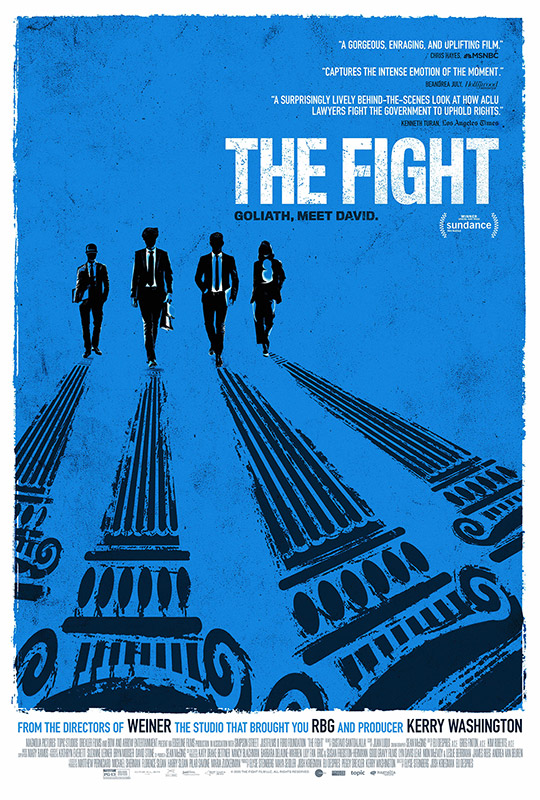 The Fight is an inspiring, emotional insider look at how these important battles are fought and the legal gladiators on the front lines fighting them. Directors Elyse Steinberg, Josh Kriegman, and Eli Despres capture the rollercoaster ride of the thrill and defeat in these deeply human battles. When a mother is separated from her child, a soldier is threatened to lose his career, a young woman’s right to choose is imperiled at the pleasure of a government official, and the ability to exercise our basic right to vote is threatened, the consequences can be devastating to us and to future generations. The Fight celebrates the unsung heroes who fiercely work to protect our freedoms. (96 mins)

$12.00 Click Here to view via Magnolia Pictures and your rental price will support the Naro!
(You will be emailed instructions from Magnolia Pictures to view the film. Watch via your Computer, Tablet, or Smartphone ∙ Cast via Chromecast or Airplay ∙ Or connect your computer or mobile device to your TV using an HDMI cord.)

Bonus: Immediately following the film there will be a pre-recorded discussion between Kerry Washington and the four ACLU lawyers featured in the film (Brigitte Amiri, Lee Gelernt, Dale Ho, and Chase Strangio).

Bonus: Live Q&A on Sunday, August 2nd, with the filmmakers and lawyers, moderated by Ann Hornaday of the Washington Post.

“While I am (mostly) a pacifist, this is one fight I can truly get behind.” – Christopher Llewellyn Reed, Hammer to Nail