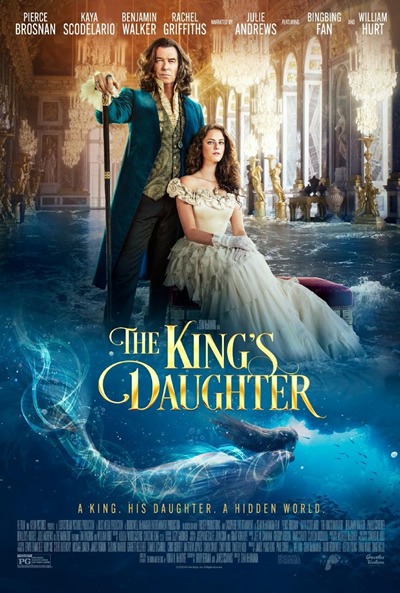 Known as The Sun King, Louis XIV (Pierce Brosnan) is the most powerful and influential monarch on the planet. Obsessed with his own mortality and the future of France, Louis turns to his spiritual advisor, Père La Chaise (William Hurt), and the royal physician to help him obtain the key to immortality. Believing a mermaid (Fan Bingbing) contains a force that grants everlasting life, Louis commissions a young sea captain to search the seas and capture the mystical creature. Further complicating his plans is his orphaned daughter, Marie-Josèphe (Kaya Scodelario), who returns to court with an abundance of elegance and an inherent defiance of authority. With a rare solar eclipse approaching, Louis will discover where his daughter’s true loyalties lie as he races against time to extract the mermaid’s life-giving force. Based on the award-winning novel The Moon and The Sun (Nebula Award Best novel 1997) the film features narration by Julie Andrews and stunning on-location photography at Versailles Palace. (PG, 97m)

“Worth the price of admission just to see the ex-James Bond Brosnan swanning around the Hall of Mirrors in glorious wig and the stylish raiment of Louis XIV and his trend-setting court.” – Roger Moore, Movie Nation