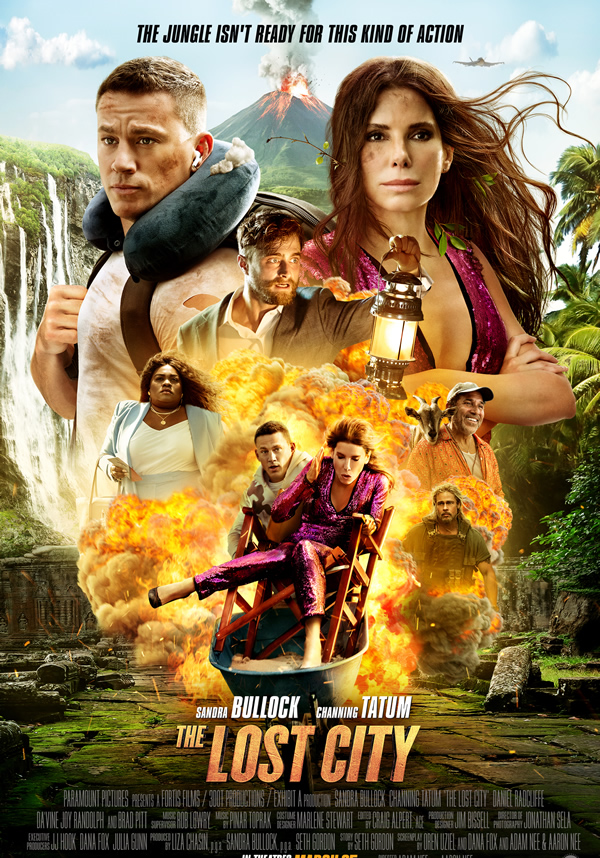 Reclusive author Loretta Sage (Sandra Bullock) writes about exotic places in her popular adventure novels that feature a handsome cover model named Alan (Channing Tatum). While on tour promoting her new book with Alan, Loretta gets kidnapped by an eccentric billionaire (Daniel Radcliffe) who hopes she can lead him to an ancient city’s lost treasure from her latest story. Determined to prove he can be a hero in real life and not just on the pages of her books, Alan sets off to rescue her. Also featuring Da’Vine Joy Randolph, Oscar Nunez, Patti Harrison and Brad Pitt. (PG-13, 112 min.)

“As a broadly goofy comedy featuring two enormously charismatic leads who are perfectly suited to each other, it scratches a particular itch very, very effectively” – Linda Holmes, NPR

“Bullock and Tatum are screwball gold together. Neither are ever too vain for the bit, and she especially gets to show off her skills as a physical comedian.” – Lindsey Bahr, Associated Press

“The Lost City is a film you can escape your troubles with for a couple of hours. Award-winning? Nope, but it is fun (and funny!)” – Sarah Jane, Austin Chronicle