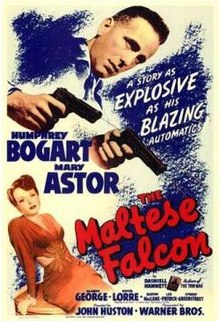 Humphrey Bogart, past winner of the Naro’s festival award for The African Queen, returns in the most famous detective movie of them all. He plays Sam Spade in a murder yarn based on the novel by Dashiell Hammett and featuring his co-stars from Casablanca, Sidney Greenstreet as Casper Gutman and the unforgettable bug-eyed Peter Lorre as Joel Cairo. This was the directorial debut of John Huston, who went on to become one of the film making greats (and to direct this festival’s Moulin Rouge. Mary Astor is a revelation as the saucy leading lady who may have to serve time. The plot is all about greed and the search for a jeweled black bird that according to Bogart, is “the stuff that dreams are made of.” That, too, is the stuff that movies are made of. Movies, that is, like this one. Mal’s part of the evening will be about meeting John Huston and behind-the-scenes notes about Bogart. (1941, 100 mins)