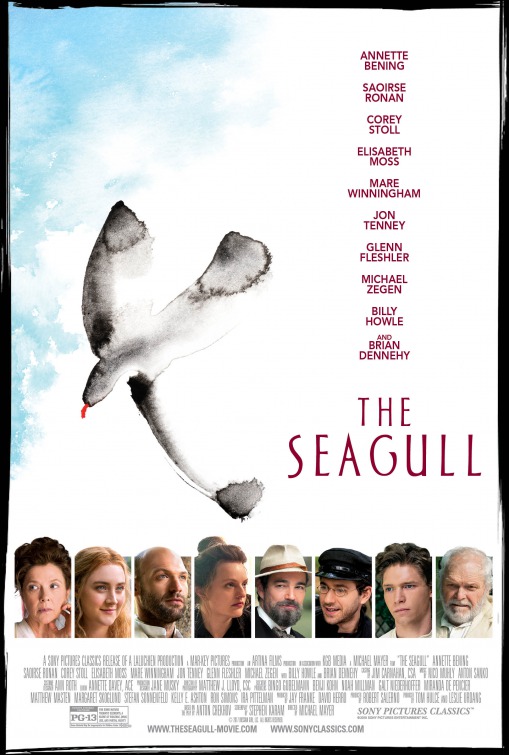 After receiving her third Oscar nomination by the age of 23, Irish actress Saoirse Ronan stars alongside four-time Oscar nominee Annette Bening for an adaptation of Anton Chekhov’s stage classic ‘The Seagull’. Originally written in 1895, ‘The Seagull’ is the Russian playwright’s first of four major plays. One summer at a lakeside Russian estate, friends and family gather for a weekend in the countryside. While everyone is caught up in passionately loving someone who loves somebody else, a tragicomedy unfolds about art, fame, human folly, and the eternal desire to live a purposeful life. This new adaptation stars Bening as the fading actress Irina Arkadina, Ronan as the pretty ingenue Nina, Corey Stoll as the famous writer Boris Trigorin, Billy Howle as the lovesick Konstantin, and Elisabeth Moss as his admirer Masha. Broadway director Michael Mayer directs. (98 mins)

“The Seagull is lush and dreamlike, leaving the drawing room for lake, field, and forest. Though we lose some of Chekhov’s claustrophobic talkiness, the dense poetry of his language, Mayer fully captures Chekhov’s sharp humor.” – Dana Scwartz, Entertainment Weekly

“Handsomely mounted and well-acted by a stellar cast, but it’s one of those theatrical adaptations that has no reason to exist for any viewer who can recall a superior stage version of the same work.” – Godfrey Cheshire, RogerEbert.com