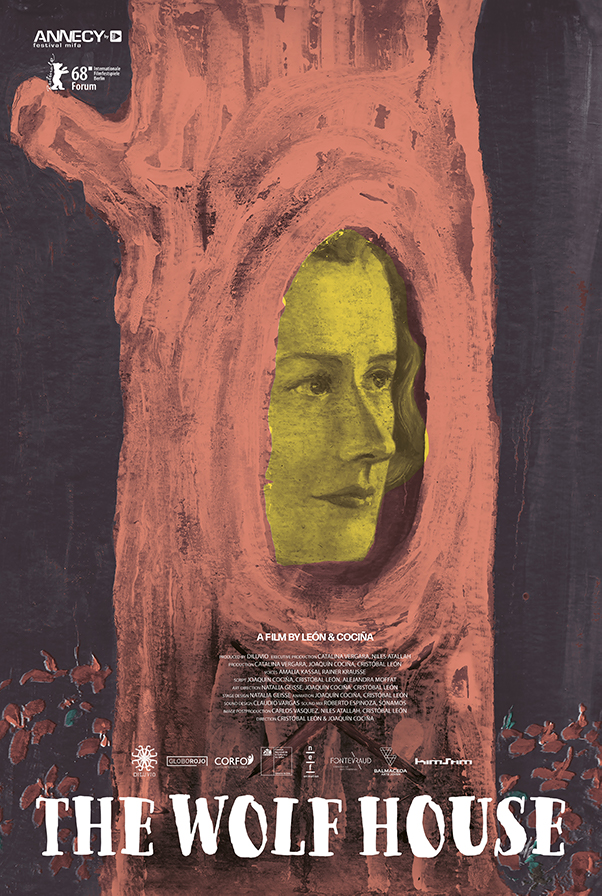 Combining stop-motion techniques, painting and photography, this exquisitely handcrafted animation feature tells the story of a girl who escapes a cult colony of religious fanatics during Chile’s darkest years under Pinochet.

Maria finds refuge in a house in the south of Chile after escaping from a sect of German religious fanatics. She is welcomed into the home by two pigs, the only inhabitants of the place. Like in a dream, the universe of the house reacts to Maria’s feelings. The animals transform slowly into humans and the house becomes a nightmarish world. Inspired on the actual case of Colonia Dignidad, The Wolf House masquerades as an animated fairy tale produced by the leader of the sect in order to indoctrinate its followers. In Spanish and German with subtitles. (73 mins)

$12.00 Click Here to view via KimStim and your rental price will support the Naro!
(You will be emailed instructions from KimStim to view the film. Watch via your Computer, Tablet, Smartphone, or Chromecast.)

View the archived Q&A with THE WOLF HOUSE filmmaking team Joaquín Cociña and Cristóbal León from May 21st.

“… the kind of film that needs to be experienced, because it’s unlikely you’ve ever seen anything like it before.” – Kathy Fennessy, Seattle Film Blog

“An elusive animated feature in stop-motion that allows connections to be made with the children’s stories of the Grimm Brothers and the surreal impulse of Jan Svankmajer.” – Ernesto Diezmartinez, Cine Vértigo